WE PROTECT YOU AND THE LIVING ENVIRONMENT

Our biocides are based on two basic active substances, hydrogen peroxide (H2O2) and silver (Ag+). We succeeded in development of multi-component stabilizers that complement the performance of our products and provide a successful, long-lasting synergistic effect of our active components.

SOME ADVANTAGES OF OUR PRODUCTS 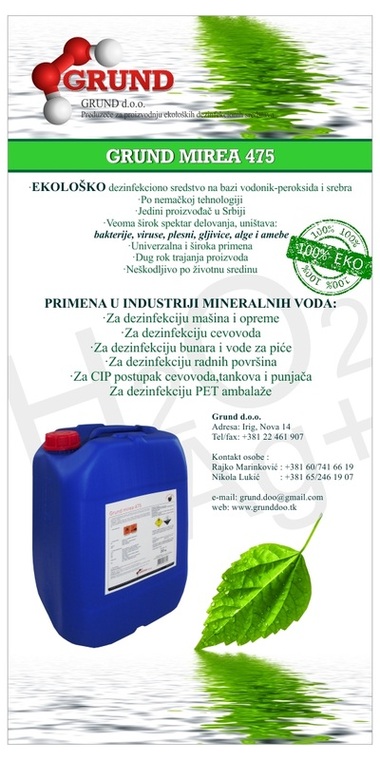 Grund Mirea 475 is a universal liquid disinfectant with a broad spectrum of action based on 50% hydrogen peroxide and silver. It is very effective in fighting bacteria, molds, fungi and algae. The product is very stable and remains unchanged upon sudden changes in temperature. The effect of the agent itself rises with increasing temperature. Unlike other disinfectants, it acts in two stages: by combining oxidative and oligodynamic properties; it has the ability to destroy biofilms. Such ability is very important for the bactericidal effect because the bacteria within the biofilm are multi-protected. The active oxygen of GRUND MIREA 475 destroys the biofilm at its very effect and destroys all microorganisms that are protected by the biofilm.

MIREA F is a non-polluting disinfectant based on stabilized hydrogen peroxide enriched with silver ions.

MIREA F is for veterinary use, namely for the disinfection and purification of water, for the purification of drinking water, or the removal of organic deposits in the system. It is also used to clean the drinking system, which is contaminated with magnesium and calcium deposits by explosion, as well as the deposition of drugs and additives that are added to drinking water.

MIREA F DETAILLY CLEANS YOUR SYSTEM FROM WELL TO NIPLS.

The mode of action in contact with impurities is very slow but extremely effective if it is constantly used for a long period of time, during which, oxygen is released into the air.

MIREA B is an environmentally friendly, non-harmful disinfectant, highly effective against bacteria, viruses, fungi and algae. The agent is based on 50% stabilized hydrogen peroxide, enriched with silver ions.

NOTE: It is applied by spraying the surface of the tank, and after completion of the work it is necessary to leave the tank open, as it releases oxygen during the reaction, which could lead to an increase in pressure in the tank. Hydrogen peroxide decomposes into water and oxygen during operation.